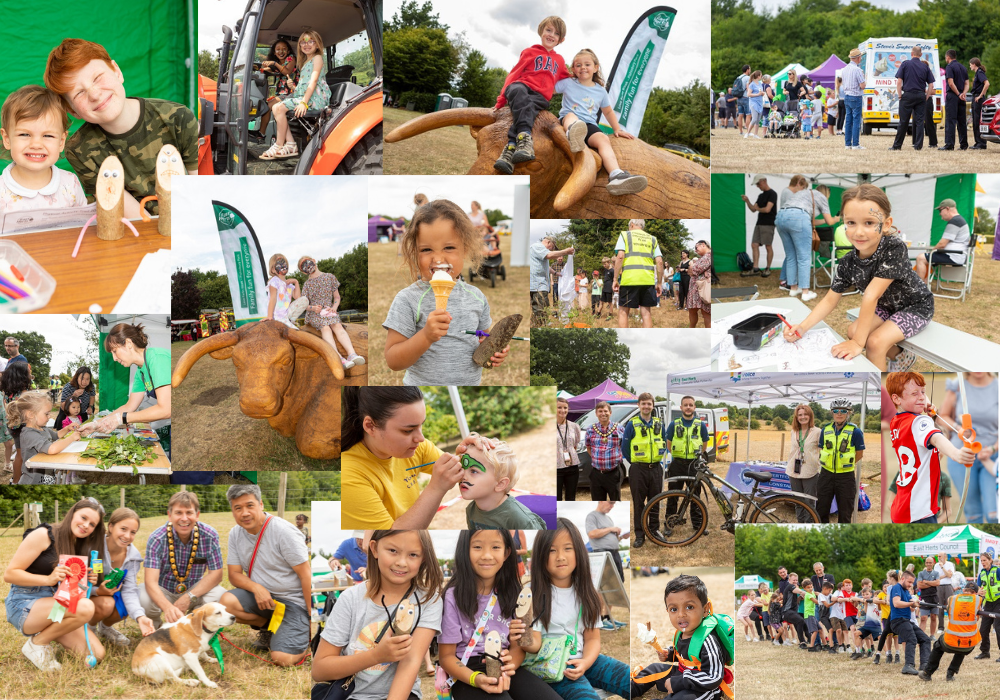 Celebrations started on Tuesday at Southern Country Park where Dogability did a demonstration of dog training techniques and children lined up against staff from Glendales and Everyone Active to win the tug of war and made Loggaheads from hazel at the Friends of Southern Country Park stall.

Over at the fun dog show the canine crowned Champion of Champions from the three categories was Buddy the Golden Retriever Cross.  East Herts Council Chairman, Ian Devonshire had the difficult job of judging the categories, but he was also joined by Vicki Youens from Animal Rescue Centre to judge the Best Rescue Dog category.  The dogs crowned winners of each category were:

At Pishiobury visitors got the chance to have a special meet up with the Longhorn Cattle that graze the park and find out more about them.  The Friends of Pishiobury Park had creative treats in store to entertain the little ones together with bug hunts and escorted walks to discover more about the nature around them.

The park recently took delivery of a hand carved sculpture of a Longhorn Cow which visitors often ask, “what is it called?”.  A poll was run on social media and online to get name suggestions in and the shortlist put to the vote at the #LoveParksEvent.  The winning name chosen was Woody.

“It was wonderful to join residents at these family events this week and see the joy on children’s faces as they ran around enjoying the fitness trail, concentrated on their craft creations, interacted with nature in the bug hunts and took pride walking dogs around the dog show.

“Our Love Parks Week events haven’t taken place since 2019 due to the Covid-19 pandemic so it was great to be part of the re-launch this year and help get these community focussed events back onto the annual calendar.

To view photographs from both events, visit the East Herts Council Facebook page and look at the photo albums: https://www.facebook.com/EastHertsDC.