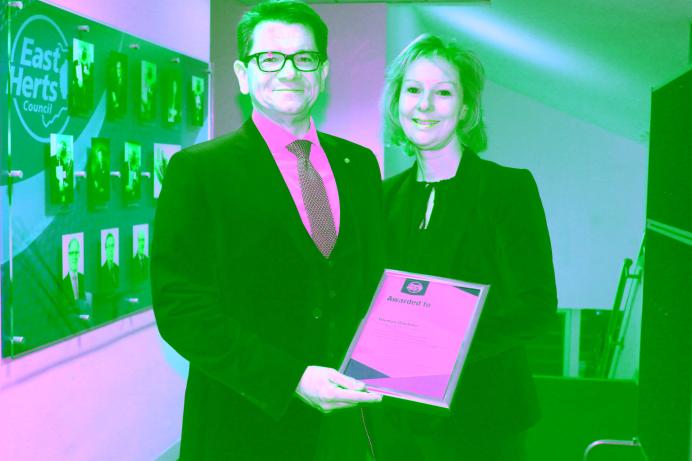 This evening we're delighted to be joined by a resident of Bishop's Stortford, Tom Gardiner who received an OBE in the Queen's Birthday Honours this year and we're also pleased to welcome his wife Eleanor.

Tom has worked for HMRC for nearly 34 years, starting in 1985 as a clerical assistant.  He has worked hard to achieve promotion through the grades and now works within the offshore directorate leading on their intelligence work.

His work takes him all over the world where he chairs meetings with other overseas tax authorities. He is admired and respected in equal measure by his colleagues both within the UK and abroad.

He has little spare time due to work pressure but when he does, he loves nothing more than spending time with his two boys playing golf. All three are members of Bishop's Stortford Golf Club.  He has played golf all his life and has loved watching the boys grow and excel in a sport they all love.

When the two boys started playing football, Tom coached both their teams, going through his coaching badges with the FA. He was involved with Bishop's Stortford Community FC for a period as their FA secretary and helped with their development committee. He's only recently stepped aside due to heavy work commitments.

His friend Colin said that Tom plays the bagpipes and addresses the haggis at a Caledonia Evening at the Day Centre in Dunmow.

Colin said: "Tom is a really great bloke and if anyone deserves an award like this, it's him."

I'd now like to invite Tom to come up and receive a certificate.